Two major achievements were celebrated recently by the Montgomery County Office for Aging, each providing the not-for-profit agency with greater financial stability.

The Montgomery County Office for Aging, Inc., hosted Friday evening a “Burn the Mortgage” celebration and dedicated the “Rao Family Meals of Montgomery” at its main office in Amsterdam. Alongside ceremoniously burning the mortgage for the agency’s 135 Guy Park Ave. building, a new sign was unveiled at the site that included the renamed meal program.

“I was surprised that the board decided to name the meal program as the Rao Family meal program,” Dr. Govind Rao said before ceremonies commenced Friday. “We are really honored.”

OFA Board President William Winsman said the Rao family has positively affected many people throughout the community through their generosity.

“If you look up the term hero, you might think of a fireman carrying a baby out of a fire or a solider saving a comrade’s life,” Winsman said. “The Rao family are heroes to this community.”

OFA Executive Director David Jordan said roughly $135,000 was left to pay on the mortgage for its main office building at the beginning of this year. Jordan said funds were donated from individuals and businesses in the community, but the Rao family donated a substantial portion of funds needed.

Jordan said when OFA representatives were eventually able to meet with Dr. Govind Rao, the Amsterdam pediatrician offered to provide the remaining amount needed for the mortgage.

“Our goal at the beginning of the year was to pay off the mortgage by the end of the year. It was supposed to be a 12-month campaign,” Jordan said. “Due to the generosity of everybody in the community, especially Dr. Rao because he ended up paying a good portion of it, we’re able to celebrate well before the end of the year.”

Jordan, who has been with OFA for nearly seven years, said the debt associated with the Guy Park Avenue building was the biggest hurdle the agency had to overcome each month. 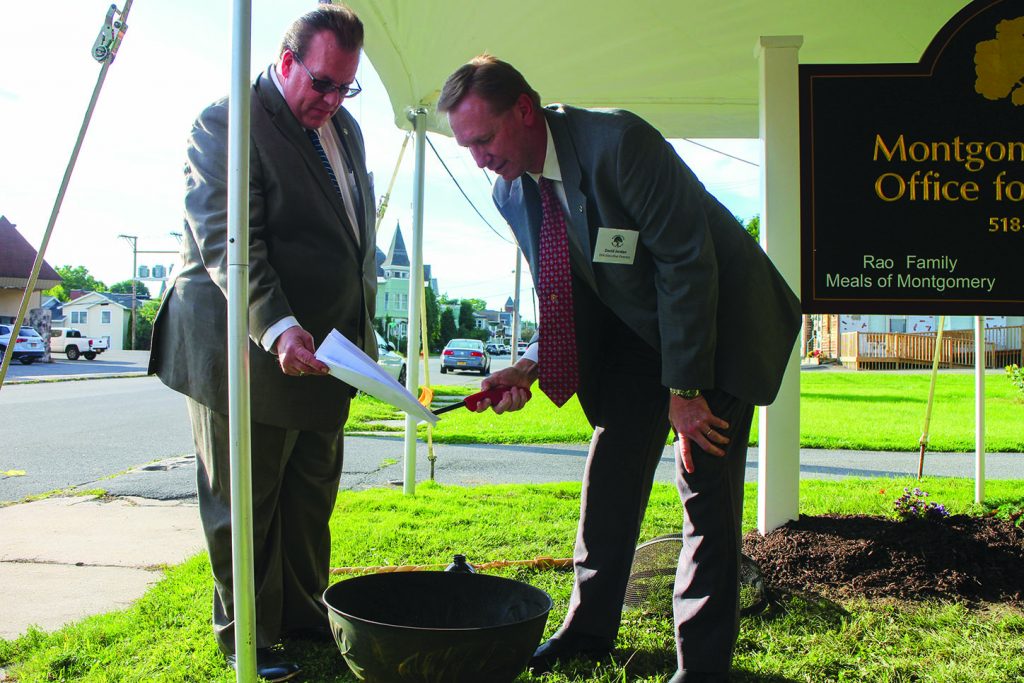 Jordan said most agencies serving the aging population are county-based, so they do not have the expense of paying the principal amount in mortgage payments.

The Neena Rao Charitable Corporation, a trust established in honor of Govind and Jyothi Rao’s daughter, also has created an account exclusively dedicated to supporting the OFA’s meal program. Govind Rao said the account would generate approximately $45,000 in dividends annually, with the principal to remain untouched.

“If there is more demand, then I’ll see if I can be able to put more money,” Dr. Rao said. “My aim is that no senior citizen should be left alone.”

Jordan said the waitlist for the meal program was eliminated and people are constantly calling up to be added to the program.

“As soon as we get them assessed they can get a meal the next day, which to be honest, I wasn’t sure was ever going to happen,” Jordan said. “We’re overjoyed that’s happening, and we hope that continues.”

He said more than 200 seniors are served through the OFA’s meal program, which provides a daily noon-time meal to each person. Some program participants based on their need are provided a “super bag,” typically containing a sandwich or frozen meal and a drink. Weekends meals are also offered to those in need.

“They can get up to 14 meals in a week,” Jordan said. “In the western part of the county where they’re very isolated, for a lot of these people the only person they see is their meals drivers. … It’s important for that daily contact Monday through Friday for somebody to come and visit with them.”

Amsterdam Mayor Michael Villa said OFA does so much for the community while asking for very little in return. Villa commended the Raos for generously supporting the agency.

“Dr. Rao sees a need and it’s like he’s always there to provide what’s needed. He’s truly been a guiding light to so many people,” Villa said. “Our city really should be proud to have someone like him speaking and giving on our behalf.”