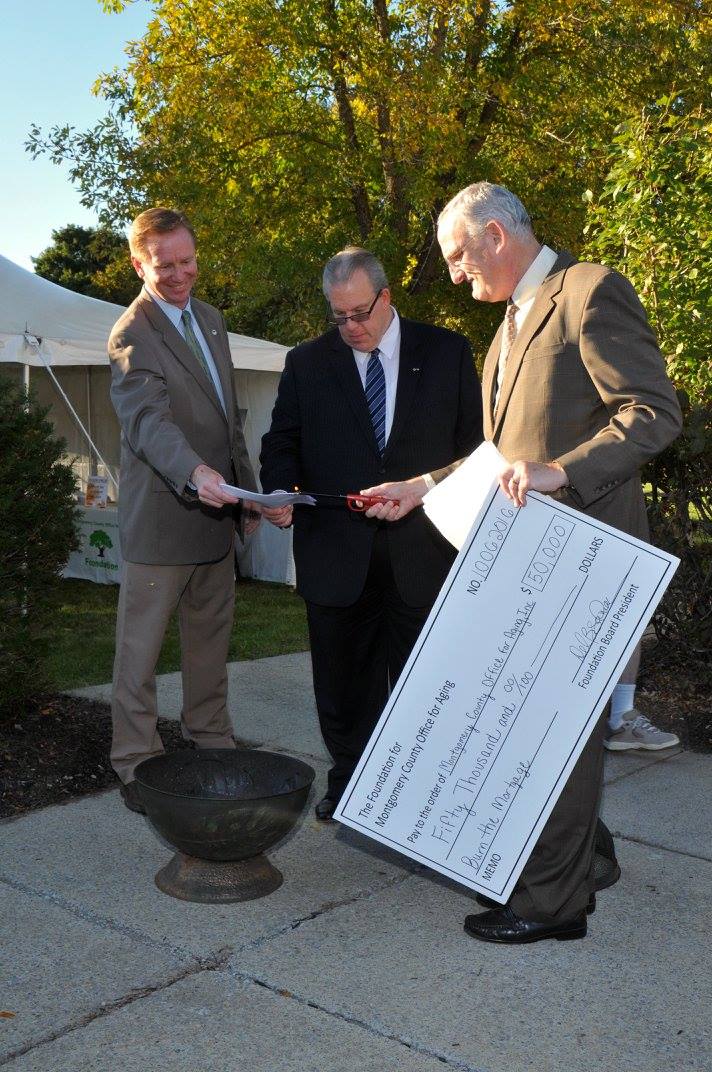 By EMILY DREW
For the Courier Standard Enterprise

PALATINE BRIDGE — After only 10 months of fundraising, The Foundation for Montgomery County Office for Aging officials were able to ceremoniously “burn the mortgage” for its commercial kitchen. The OFA began its “Burn the Mortgage” fundraiser in January with a goal to pay off the mortgage for its 17-year-old kitchen. During a ceremony Thursday, OFA officials announced the agency had reached its $50,000 goal.

OFA Executive Director David Jordan thanked the community members in attendance for supporting the agency through donations. He said there had been three years left on the mortgage, which cost the agency about $1,200 per month.

“What that will do is free up more funding to do some other things. We’ve done some wonderful things since I’ve been with the agency, that I certainly can’t take credit for, but the community has supported us in a number of ways,” Jordan said.

OFA Foundation President Del Salmon said he was proud of how far the organization had come and commended Jordan for reinvigorating the foundation’s fundraising efforts.

“I want to say ‘pinch me’ and the reason I want to say pinch me is that this organization has come so far and done such a phenomenal job for the benefit of the seniors in this county, and I couldn’t be prouder,” Salmon said, also thanking the community for its support.

He explained the “burn the mortgage” tradition began in the Depression era, when families were focused on paying back loans they had used to purchase property. In celebration, the families would burn mortgage documents.

Jordan, OFA board President Bill Winsman and Salmon ceremoniously lit a copy of the mortgage aflame outside of the commercial kitchen, which helps prepare meals for the Meals on Wheels program.

Kitchen manager Melanie Dumlau said she was happy to see the mortgage able to be paid off.

“I’m very happy. We can use the money for the program and service more seniors,” she said.

Dumlau had been with the OFA since the kitchen was at its original location in Amsterdam. The kitchen had been housed in the church across the street from the Amsterdam Police Department that has since burned down. The Palatine Bridge location was built in 1999.

Dumlau said the transition from the church to the kitchen had taken some getting used to.

“It was a transition for sure, but this is an all new building where the church was an old building with all different rooms we were in. It’s working,” she said.

The kitchen prepares about 200 meals per day for seniors, prepared by seven employees and a host of volunteers. Meals are both frozen and hot. The kitchen is equipped with a walk-in cooler and freezer, a storage room, and equipment that seals the meals to resemble the air-tight packaging for TV dinners.

Dumlau said the meals do not include any added salt or fats, so they are good for the seniors’ diets.

She said the home-delivered meals, though, do more than provide seniors with a meal for that day.

She gave the example of a meal deliverer finding one senior, who had dementia, did not have working heat in the winter, and the senior believed she’d had a cold. Dumlau said they have also found seniors who have fallen.

“A lot goes into it that nobody really realizes,” she said.

Jordan said the money that had gone toward the mortgage will go toward what the OFA’s biggest needs are. He said one option would be to the money between the Meals on Wheels program, the home service program that provides personal care or house cleaning, and the respite care program.

The funds could also be used to set up an account for maintenance needs.